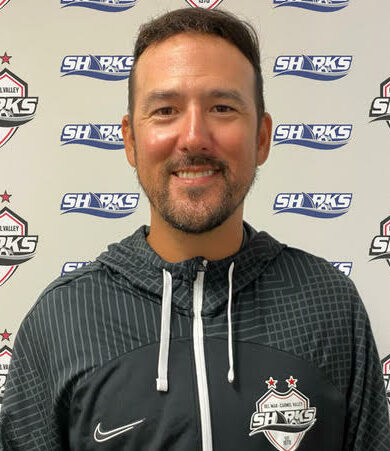 Born and raised in San Diego, Tony Arnesen has played over 25 years of soccer at various levels. He started playing competitive soccer from an early age through the U18 level on different San Diego-based teams. He played both soccer and lacrosse throughout high school and briefly played soccer at the club collegiate level, while earning his BA in Music Industry from CSU Chico.

Arnesen begins his 10th year at the Del Mar Carmel Valley Sharks where he’s been responsible for committing many players to NCAA divisions I-II-II as well as NAIA and Community College. He places a strong emphasis on helping student-athletes reach their goals to play at the highest levels, but also creates a great environment where the student aspect comes first and is the most important.

Tony places strong emphasis on work ethic, tactical understanding, strong team camaraderie, and a positive and encouraging environment where players can grow while maintaining passion for the sport.

Arnesen is the Women’s Head Coach for San Diego City College where they reached the State playoffs for the first time in program history in the 2021 season. He holds a Master’s Degree in Kinesiology from California Baptist University and is a Professor of Exercise Science at San Diego City College. He is also the Girl’s Varsity Head Coach for San Pasqual High School in Escondido and led them to a DIII-CIF Championship and Semi-Finalists in State. Arnesen holds a USSF National “D” License, Coerver Coaching Youth Diploma, NFHS Coaching Diploma, and Positive Coaching Alliance Double-Coach Certification.