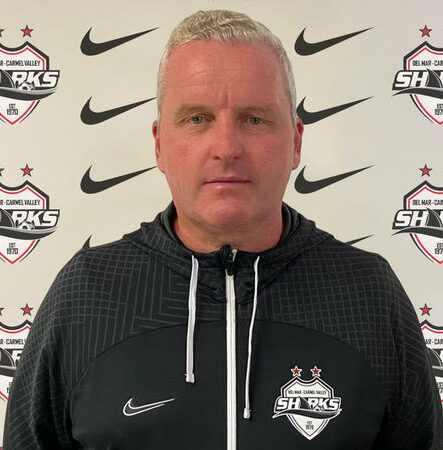 Paul Holohan grew up in Ireland playing in the League or Ireland for Shamrock Rovers and Home Farm and in England for a period with Preston North End.
He then came to the USA and attended Boston College then playing in the Big East and played Division I soccer. While attending BC Paul gained a degree in Finance and Marketing and then went on to get his MBA. Paul then had the opportunity to go back to his first love and begin his coaching career in San Diego with the University of California San Diego Mens program and as a coach at Nomads Soccer club in 1999. Since then Paul has coached and performed in leadership positions in San Diego and beyond for the past 23 years, He has been a leader in the southern California and national soccer world. Developing top players to go on and play college at top programs around the USA and go on to play professionally.
Paul Holohan holds his USSF National A License and his UEFA A License. With his vision, leadership, and track record for developing players Paul Holohan has set a high standard while overseeing Academies and in his development and placement of players. Paul has pushed clubs to the top of youth soccer in the USA.

Technical Director / Academy Director
Liverpool FC International Academy
Jan 2020 – May 31st 2022
Holohan at Liverpool International Academy in SoCal as the Academy Director was responsible for building a new elite academy program, working with the club’s current teams and recruiting top talent. Holohan has coached the professional and youth game as well as at the D1 and D2 collegiate level.

US Developement Academy Director
Albion Soccer Club
Jun 2015 – Jan 2020
San Diego, California, United States
In his role as Director of the Albion Academy, Holohan built the Academy from its inception to full status. Driving the process in all aspects of the Academy including implementing the coaching and training curriculums. He was in charge of continuing to develop players for USYNTs and College while supporting the club’s relationships within the Southern California soccer community , Holohan also in charge of developing and improving the Academy’s training facilities, programs, and recruitment process.

Academy Director – Head Coach
Carlsbad United F.C.
Jan 2010 – Jun 2015
Carlsbad, California, United States
As the Elite Academy Director Paul oversaw areas of scouting and coaching with the US Soccer Federation standards. Focused on player development, coaching program development and day to day player management of the Elite teams and contribute to the advancement of youth soccer not only in San Diego but regionally and nationally

Congratulations to our Girls 2009 for being invite

A bad game doesn’t make you a bad player. Don’

CONGRATULATIONS to all of our Sharks out there! Th

Good luck to our Boys NL & RL teams this weekend!

Good luck to our Girls NL and RL teams this weeken

Goodluck to all of our SoCal Teams competing this

As we move forward, it’s clear to us that we nee

Last but not least, Good luck to our SOCAL teams t

Both our ECNL & RL girls have matches this weekend

Weekend Match for our ECNL Boys. Good luck to all

Congratulations to some of our 2009 Boys - Xavi, M

Off the Pitch Series. Meet our Directors: Emma Gr

Our ECNL & ECRL girls also start their league this

ECNL and ECRL starts this weekend for our boys. G

Congratulations to Coach Whittaker and our 09 NL g

Congratulations to Coach McIntyre & our 2014 boys