Clemson Sophomore defender, and former Sharks Elite player Sam Staab is tied for sixth in the nation in assists, with six already this season! 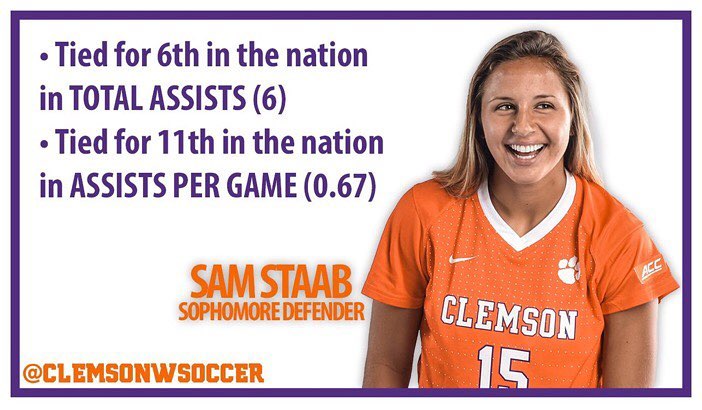 GREENSBORO, N.C. – After an eight-save performance and a clean sheet in the win over No. 7 North Carolina, Sydney Wootten was named the ACC Defensive Player of the Week, as announced by the conference office Tuesday morning. Wootten also garnered honorable mention honors in Top Drawer Soccer’s Team of the Week.

In the historic win, Wootten made eight saves including a one-on-one save in the 63rd minute to keep the Tar Heels off the board and seal the Wolfpack’s sixth consecutive victory.

Wootten hasn’t conceded a goal in 425 minutes and has recorded four straight shutouts in the Pack’s recent winning streak. The San Diego, Calif., native has recorded 30 saves and is currently fourth in the ACC in total saves. She has also dropped her goals against average from 1.56 to 0.88 over the last four games.

Her impact went past the stats, as she was phenomenal in clearing balls from the box, controlling the tempo of the match and distributing the ball from the back.

The performance was key in earning the Pack’s biggest win over a ranked opponent since it took down the No. 1 North Carolina squad in 2002. The win marked the Pack’s first victory ever at Fetzer Field and the second career win for the Pack over the Heels.

previous
Molly G. (G99E) has committed to play for the Naval Academy!
Notice: Trying to access array offset on value of type bool in /www/wp-content/themes/oxigeno/views/prev_next.php on line 36
next
$14,851 Raised for Safe Fields
JOIN THE CLUB